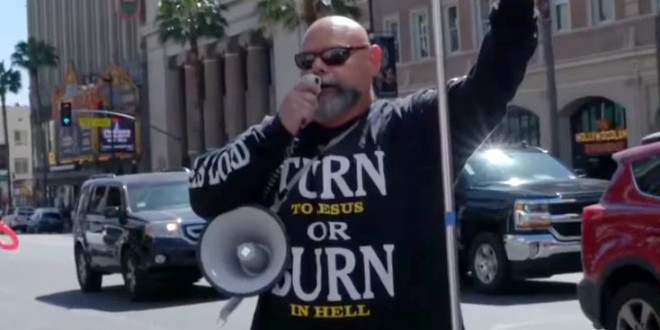 I cringed a little bit when I learned that another country had just aired a documentary about the United States… but thankfully, it wasn’t about Donald Trump. It was about vile people who aren’t close to getting their hands on the nuclear codes: Hate-preachers like Steven Anderson.

The BBC’s America’s Hate Preachers, directed by Hannah Livingston, is all about why Bible-thumpers who celebrate the deaths of gays and lesbians, the subjugation of women, and (I assume) their testosterone levels have any sort of following whatsoever.

This is what evangelical Christianity represents to people around the world. We’re a nation where hate-preachers like Anderson can not just rise up but get a large following — and if you think he’s just an extreme example, remember that we’re weeks away from possibly electing a President whose own hate is propped up by his mainstream evangelical Christian base.

The video below appears to be a bootleg so you might want to watch it soon before it gets yanked.