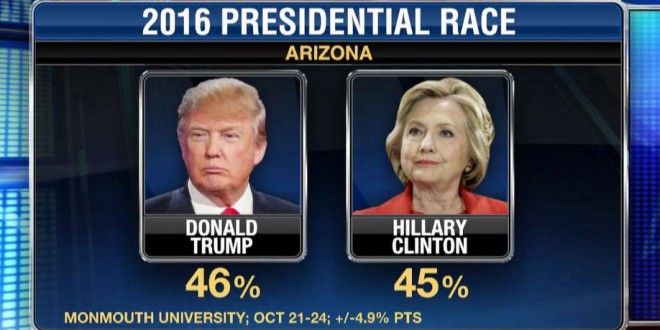 Two weeks out from Election Day and Arizona is a toss-up, according to a Monmouth University poll released Tuesday afternoon. Donald Trump and Hillary Clinton are deadlocked in Arizona, a state that has gone red in 15 of the last 16 presidential elections and where Trump leads by just 1 percentage point.

In a four-way race, Trump tops the field with 46 percent support among likely voters, followed by Clinton at 45 percent, Libertarian nominee Gary Johnson at 4 percent and Green Party candidate Jill Stein at 1 percent. Three percent of respondents are undecided.

Clinton has a 40-point advantage among the state’s non-white voters, 67 percent to 27 percent. Trump, however, has decisive leads with white voters (56 percent to 35 percent), including white men (64 percent to 26 percent) and white voters without a college degree (66 percent 28 percent).

Previous MAINE: Portland’s Only Gay Bar To Close [VIDEO]
Next Giuliani: I See Hillary In An Orange Jumpsuit [AUDIO]