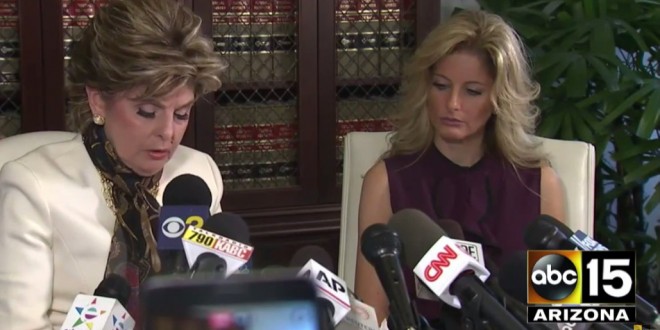 Apprentice Contestant Alleges Trump Sexually Assaulted Her: He Thrust His Genitals Against Me [VIDEO]

Are you losing count yet? Slate reports:

Another witness has stepped forward to claim that Donald Trump made sexually inappropriate advances toward her in 2007, after she had been a cast member of The Apprentice. Summer Zervos, who is represented by attorney Gloria Allred, told her story at a press conference early Friday afternoon. Zervos says she met Trump on Season 5 of The Apprentice, then went to see him at his offices in New York in 2007, at which time her kissed her several times on the mouth, in casual greetings that made her uncomfortable.

A few days later Trump allegedly flew out to Los Angeles and got in touch with her with an offer of dinner. He had Zervos brought to his bungalow at the Beverly Hills Hotel, where she saw his clothes on the bed, and he called out to her from a room adjacent to his bedroom. After 15 minutes, he joined her with his clothes on and began kissing her, open-mouthed and dragging her toward him. He allegedly grabbed her shoulder and her breast. She describes him having “led her to the bedroom” as she resisted. She described him as “thrusting his genitals” against her clothed body.