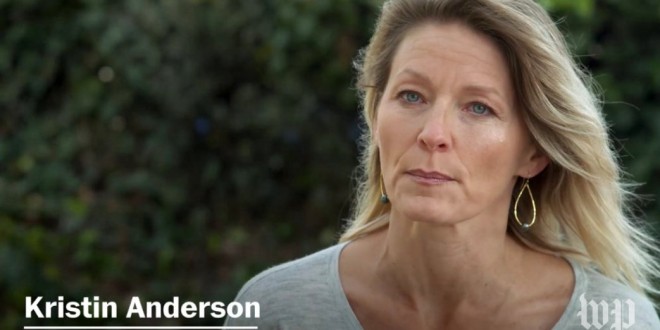 Another Trump Accuser Comes Forward: He Slip His Hand Up My Skirt And Touched My Vagina [VIDEO]

Kristin Anderson was deep in conversation with acquaintances at a crowded Manhattan nightspot and did not notice the figure to her right on a red velvet couch — until, she recalls, his fingers slid under her miniskirt, moved up her inner thigh, and touched her vagina through her underwear.

Anderson shoved the hand away, fled the couch and turned to take her first good look at the man who had touched her, she said.

She recognized him as Donald Trump: “He was so distinctive looking — with the hair and the eyebrows. I mean, nobody else has those eyebrows.”

At the time of the incident, which Anderson said took place in the early 1990s, she was in her early twenties, trying to make it as a model. She was paying the bills by working as a makeup artist and restaurant hostess. Trump was a big celebrity whose face was all over the tabloids and a regular presence on the New York club scene.

The episode, as Anderson described it, lasted no more than 30 seconds. Anderson said she and her companions were “very grossed out and weirded out” and thought, “Okay, Donald is gross. We all know he’s gross. Let’s just move on.”

Previous Obama Rips Into Crybaby Trump: He’s Complaining About The Ref Before The Game’s Even Done [VIDEO]
Next WISCONSIN: Paul Ryan Speaks For 20 Minutes Without Naming Trump, Says Vote For Who You Want [VIDEO]