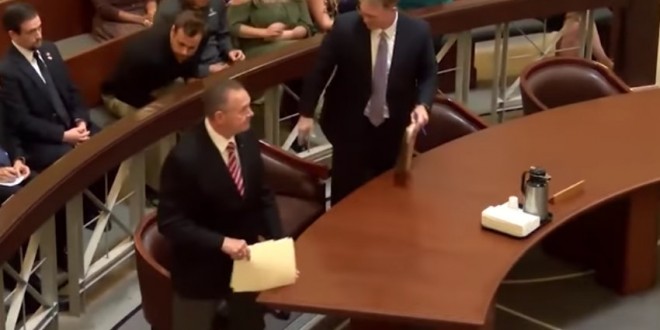 But with Moore looking on in the Alabama Supreme Court chambers, acting Chief Justice Lyn Stuart – standing next to the bench in a blue dress without a robe – told court staff to start the drawing of names for the special Supreme Court for Moore’s appeal. Stuart said there was “no court to rule” on Jauregui’s motion.

“The court is recused,” she said. “There’s a court right here,” Jauregui said, pointing at the empty chairs of the Alabama Supreme Court. When Stuart directed staff to continue drawing, Moore, Jauregui and a handful of supporters got up and left the court.

Today replacement judges, who will preside over the appeal for Chief Justice Roy Moore, were drawn from a box of 50 names of retired judges that were literally pulled from a box held over the head of the person drawing the names in the Alabama Supreme Court. Chief Justice Moore, who was seated at the attorney’s table, left the courtroom before the process began. On the steps of the Supreme Court, the Chief Justice held a press conference and stated, “I object to the procedure that is happening inside. These judges should be selected from a body of elected officials so they are accountable to the people.”

Chief Justice Moore had filed a motion to recuse four of the five justices who made up the 5-3 opinion to select retired, rather than current, judges. He requested that replacement justices be selected by a random and publicly observable drawing from a pool of sitting circuit judges. However, in a 5-3 vote, the majority decided to allow Acting Chief Justice Lynn Stuart to work with the governor to oversee a random selection of seven “retired” judges from a pool of 50 judges. The first seven qualified and willing judges will serve as the special Supreme Court to hear Moore’s appeal. The three dissenting justices argued that the judges should be accountable to the public and having a panel of all “retired” judges means they would not be accountable.

“We will review the names of the seven judges that are selected and make a decision about whether there are names that raise conflict of interest concerns,” said Mat Staver, Founder and Chairman of Liberty Counsel. “Chief Justice Moore is merely asking for the same thing any citizen is entitled to receive – equal justice under the law. He is not wanting judges that have a bias for or against him. He wants judges who will follow the rule of law. Politics and ideology have no place in the final outcome of this case. Objective and dispassionate adherence to the rule of law is what the Chief Justice and every citizen deserves. This case has had far too many irregularities and political agendas. We look forward to receiving a fair hearing,” said Staver.