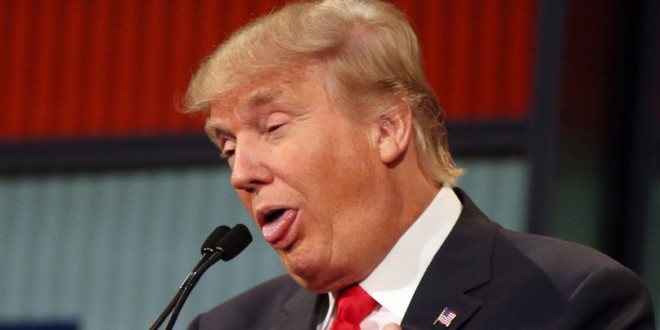 Washington Post To Trump: Where’s That $5 Million You Promised To Donate If Obama Is An American?

Donald Trump was in large part responsible for spreading the conspiracy theory that President Barack Obama was born abroad (spoiler alert: Obama was born in Hawaii). After years of promoting the theory, Trump blurted Friday that he believes Obama was in fact born in the United States — and if Trump is true to his word, that admission will cost him $5 million: In 2012, Trump offered to donate $5 million if Obama would produce records related to his citizenship. Long after others had stopped pressing the case, Trump continued. “The president should come clean,” Trump said on Irish television in 2014, a clip unearthed by BuzzFeed late Thursday, refusing to accept that Obama’s Hawaii birth certificate was genuine proof. “A lot of people feel it wasn’t a proper certificate.”

So now that Donald Trump — after years of race-baiting and rumor-mongering — believes that President Obama was born in the United States, will he follow through on his promise to donate $5 million to charity once he was given proof? That was the question posed by The Washington Post’s David Fahrenthold, who has been reporting doggedly on Trump’s charitable giving (or lack thereof). As Fahrenthold’s reporting has borne out, there is scant evidence that Trump has given much of his own personal money to charity in recent years. Rather, it appears the GOP nominee tends to use the donations of others to his Trump Foundation to claim charitable giving.

Sent this to @realDonaldTrump spox, to ask how he will fulfill promise to give $5M if assured Pres. Obama born in US pic.twitter.com/Uc751PeGrl