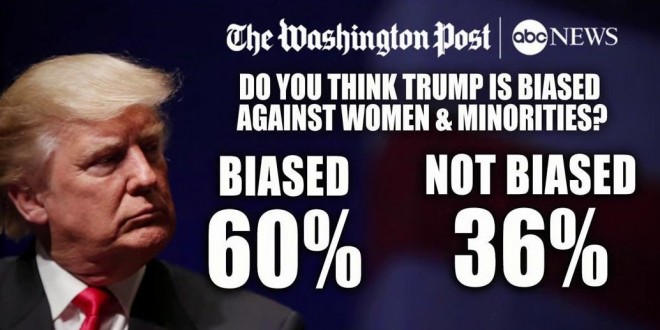 If Clinton’s goal was to force a public discussion of Trump’s bigotry and chauvinism, well, the Post poll finds that a large majority of Americans agree with her that Trump is biased against women and minorities, including among the voter groups that Trump needs to improve among in order to win.

The Post poll, which found Clinton leading Trump by five points among likely voters nationwide, also found that 60 percent of Americans believe Trump “is biased against women and minorities,” with 48 percent believing that strongly. According to the crosstabs, college educated whites believe this by 57-41, and college educated white women — a crucial demographic that the campaigns are fighting over — believe it by 61-39.

What’s more, majorities of college educated white men and non-college white women also believe this. Indeed, as James Downie puts it: “At this point, the only group of voters that doesn’t think Trump is biased is white men without a college degree.”

Meanwhile, on the question of which candidate has the right personality and temperament to be president, large majorities of Americans overall (61-30) and college educated whites (61-32) pick Clinton, not Trump. It’s hard to know how related that is to perceptions of Trump’s bigotry, but most indications are that Trump has to improve among college educated whites to win, and it’s hard to see how such perceptions help him.