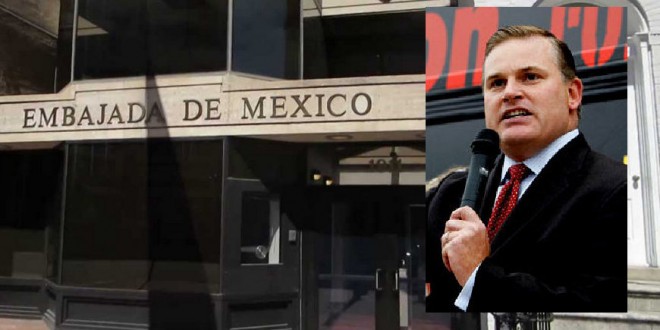 WASHINGTON: Brian Brown To Hold Anti-Gay Protest At Mexican Embassy In Advance Of Protests In Mexico

Join us as we gather in front of the Mexican Embassy to the United States on September 23rd at noon for a demonstration in support of the family in solidarity with the Mexican people! We will join together to show support for the efforts by the Frente Nacional por la Familia (FNF) and other leaders in Mexico to oppose radical proposals by Mexico’s government under President Enrique Peña Nieto, which include: imposing same-sex ‘marriage’ across the land, in every legal venue; promoting “gender ideology” in public schools so that children are taught that they can choose their own gender; and undermining the right of parents to decide on the education of their children according to their own convictions and principles.

The FNF led marches throughout Mexico on September 10-11 in 122 cities and towns that brought an estimated 1.2 million people into the streets to protest these radical “reforms” proposed by the government. On September 24th, a huge national march is planned in Mexico City, and our gathering will be to show international support for that March as well as draw media attention to the matter in the United States, where the press has been predictably silent on the pro-family efforts underway in Mexico. [JMG fact check: Reuters reported “tens of thousands” attended the protest marches.]

Our gathering will feature some notable Hispanic and Latino pro-family leaders, and we will be delivering a letter to the Embassy showing support for the efforts of the Frente National por la Familia and their millions of grassroots supporters. Please come and join us, and bring your phone to take photos and spread the word about these historic happenings on social media!

We expect that only a handful of nutjobs will show at the embassy as fewer than 300 appeared for this year’s DC hate march, which was promoted relentlessly for months and months beforehand.