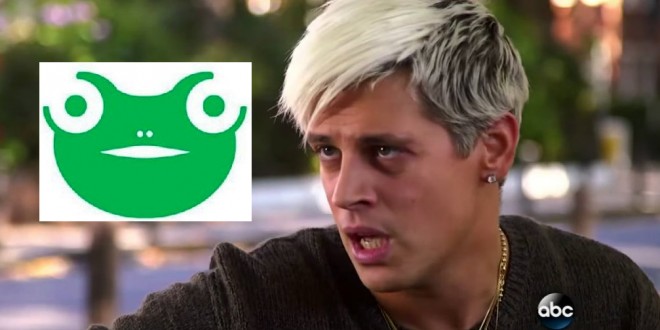 And of course Gab’s logo is a highly-stylized version of Pepe, the neo-Nazi frog mascot. Wired reports:

Gab is less than a month old, so it may well flame out like Peach or Ello. But for now, the platform looks like an artifact from a dystopian universe where the alt-right completely took over Twitter. Gab has over 42,000 people on its waitlist, more than 11,000 active members, and among them are nearly all the alt-right’s online kingpins, including the Internet’s self-styled super-villain, Breitbart writer Milo Yiannopoulos himself, who was recently banned for life from Twitter.

“We promote raw, rational, open, and authentic discourse online,” says Gab CEO Andrew Torba. “We want everyone to feel safe on Gab, but we’re not going to police what is hate speech and what isn’t.” Yet in its first weeks, rather than create a free-speech zone where all voices are heard and anyone can say anything to anyone, Gab directly caters to a narrow, conservative, provocateur sensibility.

The trending hashtags? Usually stuff like #HillarysHealth and #HitlerPickUpLines. So far Gab is less a censorship-free utopia than an alt-right safe space—which is ironic, considering how much the alt-right loathes the very idea of safe space.

You can’t get past Gab’s splash page until you enroll. Which I just tried to do. (Tipped by JMG reader Str8 Grandmother)

Previous Dr. Oz Producers Edit Out Trump’s Creepy Comment About Kissing Daughter Ivanka “Every Chance He Gets”
Next CLEVELAND: Street Where Trump Supporter Don King Murdered A Man To Be Named For Don King [VIDEO]