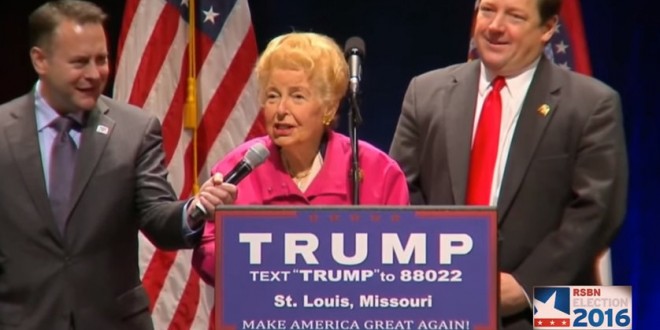 Donald Trump, the best friend the gays ever had, will reportedly attend the funeral of the woman who screamed bloody murder about the legalization of homosexuality in the United States. At least, that’s the claim of homocon Jim Hoft. He writes:

Exclusive from Eagle Forum representative: Donald Trump will attend the funeral service tomorrow in St. Louis of friend and supporter Phyllis Schlafly. Conservative icon Phyllis Schlafly passed away at age 92 on Monday. Schlafly was a constitutional lawyer, conservative activist, author, speaker, columnist and founder of the Eagle Forum. Phyllis was active promoting conservative agenda until her passing. She wrote a weekly column for over 50 years. Schlafly released a book in August with co-authors Ed Martin and Bret Decker – The Conservative Case for Trump. In March Phyllis Schlafly endorsed Donald Trump for president at the Peabody Opera House in St. Louis.