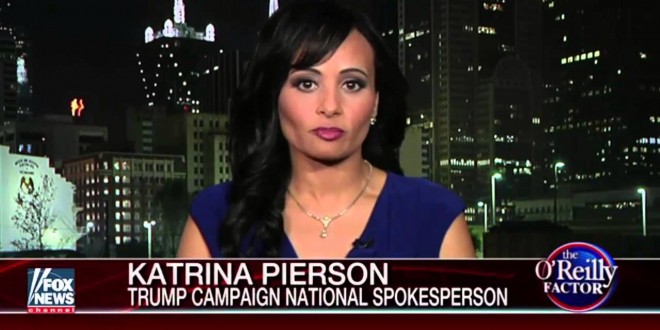 Trump Spox Katrina Pierson: Only Online Polls Are Valid Because The Media Skews Their Own Polls [AUDIO]

Trump campaign spokeswoman Katrina Pierson took a page from her boss and touted Trump’s performance in post-debate online polls that have no scientific accuracy whatsoever. After conservative talk show host Joe Pags told Pierson that “news organization polling” is tilted against Trump because media outlets “have some sort of vested interested in getting Hillary Clinton elected,” Pierson said that the scientific polls conducted by media firms are “skewed.” As proof, she cited the fact that the CNN sampled more Democrats in its poll of debate viewers. Three other scientific polls also found that most people thought that Clinton won the debate.

Pierson vigorously defended the accuracy of voluntary, unscientific online polls: “When you look at the online polls, these are people who are, like I said, not engaged in the day-to-day, 24-hour news cycle, watching cable news all day every day, these are just people. If you’re looking at Time magazine, if you’re on another website and they’re doing a poll and you vote in that poll, by the way, to the tune of over a million votes in some of these polls, that’s important, because those aren’t the people who are in it one way or another, a lot of those people are just engaging.”

Previous REPORT: 2012 Lawsuit Alleged That Trump Demanded That “Unattractive” Women Be Fired From His Resort
Next Eric Trump: Bill Clinton May Be The Worst Sexist Ever