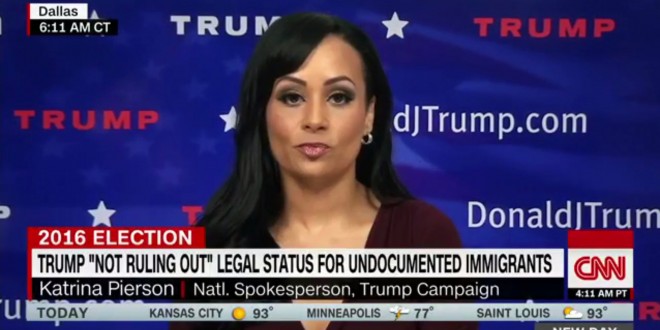 Trump Spox Katrina Pierson: He Only Flip-Flopped On Immigration Because He Is A Negotiator [VIDEO]

When asked about an apparent flip-flop on illegal immigration Tuesday morning, Donald Trump spokeswoman Katrina Pierson responded that the Republican presidential candidate had always billed himself as a negotiator.

New Day‘s Alisyn Camerota challenged Pierson by playing two audio clips of Trump. In the first clip, he promised that illegal aliens could only gain legal status by leaving the country and reapplying. But on Monday, Trump said simply “I’m not ruling out anything” when asked about amnesty for illegal immigrants.

“Well, again, he has said from the beginning of this campaign all the way back to the primary that he was going to be a negotiator in Congress,” Pierson responded. “His governing policy has not changed if you’re in this country illegally, you should return to your home country and enter legally.”

.@KatrinaPierson on Trump’s changing immigration stance: He said from beginning he’d be “a negotiator in Congress” https://t.co/G4qVqhxleN