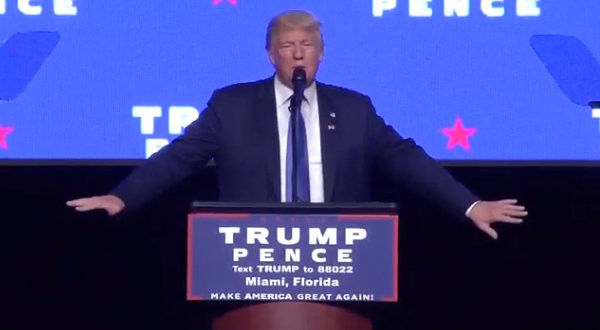 Trump: Hillary’s Bodyguards Should Be Disarmed And Then “Lets See What Happens To Her” [VIDEO]

Another “joke” about assassinating Hillary Clinton. The Guardian reports:

If Clinton were truly as anti-gun as she claims to be, Trump told the audience, her Secret Service detail should disarm itself. “I think that her bodyguards should drop all weapons – they should disarm. I think they should disarm immediately, what do you think?” Trump asked the raucous crowd. “Let’s see what happens to her.”

Trump was deeply criticized in August after suggesting at a rally in Wilmington, North Carolina, that gunowners could take the Second Amendment into their own hands if Clinton were elected and began nominating Supreme Court justices. “Hillary wants to abolish, essentially abolish, the Second Amendment,” Trump said at the time.

“If she gets to pick her judges, nothing you can do, folks. Although the second amendment people, maybe there is, I don’t know. But I’ll tell you what, that will be a horrible day.” The remarks were seen by many – including the Democratic nominee herself – as hinting at calling for Clinton’s assassination, or that of her judicial nominees.

Trump: That birther speech went really well today. But you know what would be icing on this cake? https://t.co/ivZMU7mbDI

Previous Hillary Ad Slams His “She Started It” Birther Claim: Trump Lies Even When He Admits The Truth [VIDEO]
Next Playwright Edward Albee Dies At Age 88