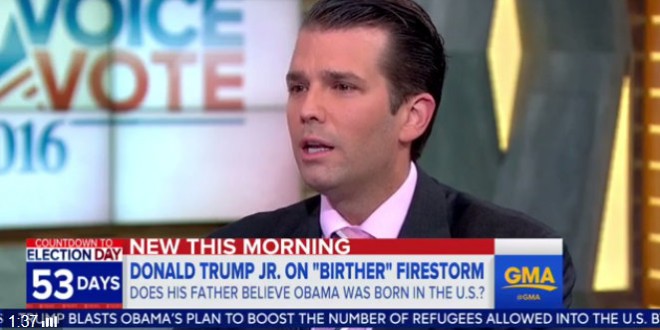 Trump Junior: That Wasn’t A Holocaust Joke And I Never Heard Of The Nazi Mascot I Tweeted Out [VIDEO]

Donald Trump Jr. has no idea what Pepe the Frog is, the eldest son of the Republican presidential nominee remarked Friday, as he also defended himself after some accused him of referring to the Holocaust using the term “gas chamber” in a radio interview earlier this week.

Rejecting that he was making a Holocaust reference, Trump Jr. faced more questions on ABC’s “Good Morning America” from George Stephanopoulos, who asked him about an Instagram post he shared last weekend featuring a Trump version of Pepe.

In that photo, Trump Jr. is among the faces superimposed on the bodies of characters from “The Expendables” as “The Deplorables,” a reference to Hillary Clinton’s comment about half of Trump supporters.

Calling the frog meme a “well-known symbol of the white supremacist movement,” Stephanopoulos referred to the company of others in the photo who have propagated various conspiracy theories.

On @GMA, Donald Trump Jr. says he doesn’t know if his father will explicitly say Obama was born in U.S. https://t.co/dG8vFnAS17