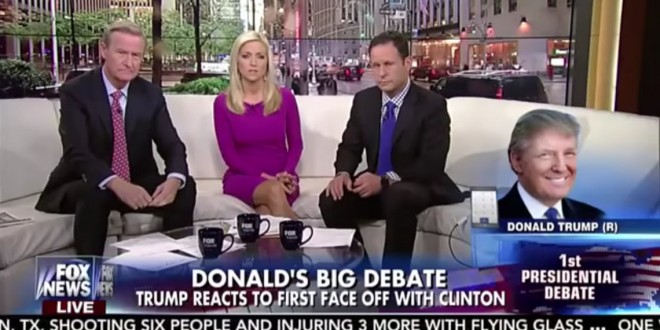 At the end of Monday night’s presidential debate, Hillary Clinton accused Donald Trump of taunting one of his former Miss Universe contestants about her weight.

Clinton said the Republican nominee’s criticisms of Alicia Machado, a Venezuelan who won the Miss Universe contest in 1996, was “one of the worst things he said” about women. “He called this woman Miss Piggy. Then he called her Miss Housekeeping because she was Latina.”

While Trump appeared to dispute Clinton’s accusation on the debate stage, he called into Fox and Friends Tuesday morning and once again called Machado fat.

“I know that person. That person was a Miss Universe person,” Trump told the Fox News morning show. “And she was the worst we ever had, the worst, the absolute worst, she was impossible,” he said. “She gained a massive amount of weight, and it was a real problem. We had a real problem. Not only that, her attitude.”

Previous TRAILER: The Crown
Next Will & Grace Cast Reunites For Election Short [VIDEO]