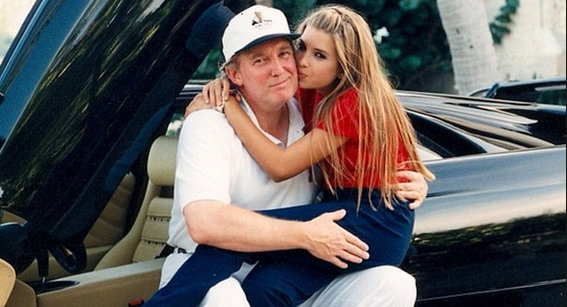 Trump In 1999: Ivanka Made Me Promise Not To Date Girls Younger Than Her And The Field Is Very Limited

Donald Trump must not play blackjack, because he wanted to hit on 17. The casino owner and future Republican nominee told Howard Stern in 1999 that his daughter Ivanka, who was 17 at the time, had made him swear not to date anyone younger than her.

“I have a deal with her. She’s 17 and doing great — Ivanka. She made me promise, swear to her that I would never date a girl younger than her,” Trump said during a taping of Howard Stern’s radio show in June 1999. “So as she grows older, the field is getting very limited.”

“The nerve of her. Now you can’t go out with 16-year-olds,” Howard Stern joked in response. The boorish comments, unearthed by a Democratic strategist and shared exclusively with the Daily News, came as Trump was going through his second divorce.

He had already begun dating Melania, who later became his third wife. She was 29 at the time, 12 years older than Ivanka and 24 years younger than Trump, who was just about to turn 53 when the program aired.

The age of consent in New York is 17, so Trump essentially told Ivanka that he wouldn’t violate statutory rape law. Trump’s campaign did not respond to requests for comment. They’re the latest in a string of controversial remarks Trump made in his regular call-ins to the shock jock’s program.