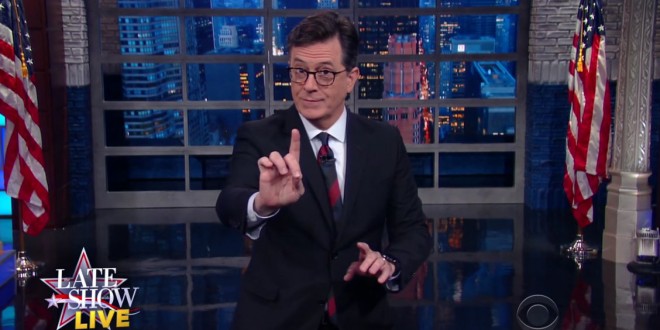 Stephen Colbert: Trump Seemed Like He Was On Coke, He Was Like Scarface But With More Face [VIDEO]

The first meme of Monday night’s presidential debate was Donald Trump’s constant sniffling, and it didn’t take long for Stephen Colbert to mock the GOP nominee for his runny nose.

During his monologue on Monday’s live edition of The Late Show, Colbert called out Trump’s sniffles, joking that Trump “sounded like he was fighting off a cold with cocaine.”

After playing a montage of Trump sniffling, Colbert added, “He sounded like the coked-up best man in the bathroom at a wedding. ‘You guys, I got it, I know how we can fix the entire economy. Let’s buy a boat.’”

Colbert wasn’t the only person to notice Trump’s runny nose. The candidate was mocked throughout the debate for his ailment, and even drew a one-liner from former Vermont governor and Democratic National Committee chair Howard Dean. “Notice Trump sniffing all the time. Coke user?” Dean wrote on Twitter.

Previous Will & Grace Cast Reunites For Election Short [VIDEO]
Next Madonna Hits Trump For Renewed Attack On Rosie O’Donnell: Mess With My Girl And You Mess With Me