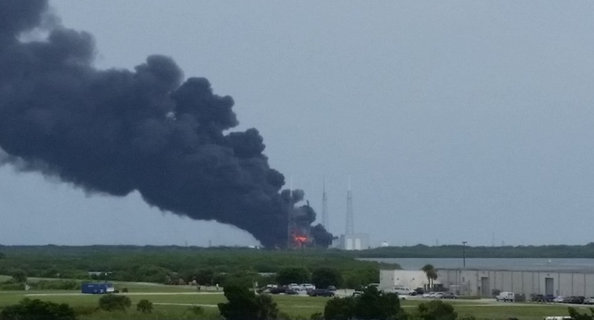 SpaceX’s Falcon 9 rocket, meant to launch a satellite this weekend, exploded on the launch pad at Cape Canaveral, Florida. Reports suggest the explosion occurred during a static fire test of the rocket’s engines. The Falcon 9 was getting ready to launch the Amos 6 satellite, a communications probe for the Israeli satellite operator Spacecom. The mission was scheduled for 3AM ET Saturday morning. Prior to all launches, SpaceX conducts a static fire test, in which the rocket’s engines are turned on while the vehicle is constrained. It’s a routine procedure the company has done many times before.

Facebook planned to use some of the satellite’s capacity to expand its Internet.org initiative in Africa. Brevard County Emergency Management Director Kimberly Prosser said the explosion took place on the launch pad at about 9:15 a.m. “There are no hazards to the general public,” Prosser said. “We’re monitoring the situation, but there have been no requests for assistance,” she said.

At the Titusville Area Chamber of Commerce the explosion startled the staff. “We were sitting here and all of a sudden it sounded like a sonic boom and the building started to shake,” said Denny Waktins of the chamber. “There were a couple of minor booms after that and then we went outside and saw the smoke plume. It was a well-defined plume, not like a controlled burn.”