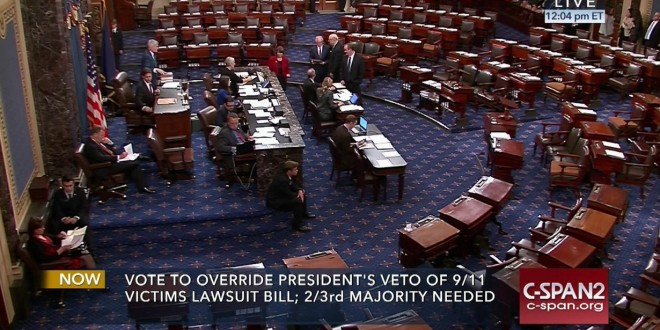 The Senate voted overwhelmingly on Wednesday to override President Obama’s veto of legislation allowing lawsuits against foreign sponsors of terrorism, setting up an almost certain and historic defeat for the White House on the bill. The House is expected to follow suit within hours, making it the first veto of Obama’s presidency that has been overturned by Congress.

Obama vetoed the legislation Friday because he said the bill — known as the Justice Against Sponsors of Terrorism Act, or JASTA — would infringe on the president’s ability to conduct foreign policy. It was the 12th veto of his presidency.

But after an intense, lengthy push by 9/11 survivors and families of victims who want to sue Saudi Arabia based on claims the country played a role in the 2001 terror attack, even Obama’s Democratic allies on Capitol Hill voted to override his veto. The final vote tally was 97-1. Minority Leader Harry Reid, D-.Nev., cast the sole vote against override.

“In our polarized politics of today, this is pretty much close to a miraculous occurrence,” said Sen. John Cornyn, R-Texas. Democrats and Republicans in both cambers have agreed, he said, that the bill “gives the victims of the terrorist attack on our own soil an opportunity to seek the justice they deserve.”