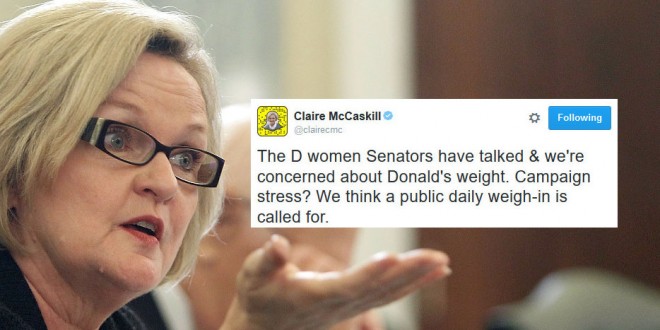 Democratic Sen. Claire McCaskill (Mo.) on Wednesday raised the issue of Donald Trump’s weight, poking at the GOP presidential nominee after two days of headlines regarding his 1996 comments about a Miss Universe winner.

McCaskill tweeted that her female Democratic colleagues have discussed the issue and determined that they’re “concerned.” “Campaign stress? We think a public daily weigh-in is called for,” she added.

The Missouri Democrat then retweeted someone asking if her tweet was a joke, adding, “Yes. Obviously. A pointed one.” McCaskill has remarked on the issue of weight in the past, albeit in personal terms. She announced in 2011 that she had reached a goal of losing 50 pounds and cited Twitter as a way of staying motivated.