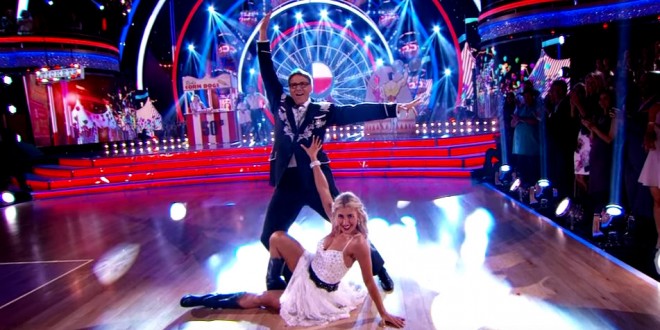 Rick Perry Bombs, Olympian Ryan Lochte Gets Rushed By Protesters On Dancing With The Stars [VIDEO]

Rick Perry’s “Dancing with the Stars” debut went about as well as his two presidential bids. But the evening took a dramatic turn when a security scare targeting Olympic swimmer Ryan Lochte interrupted the show’s live telecast.

The former Texas governor took his inaugural spin around the floor Monday night during the show’s Season 23 premiere. He was partnered with Emma Slater for a cha cha set against a carnival backdrop to the tune “God Blessed Texas.”

Perry earned a total of 20 out of 40 points for his flailing arms and lumbering footwork. It was the lowest out of the show’s 13 couples. Judge Len Goodman called the dance “a little bit pedestrian.” Bruno Tonioli dubbed it “not exactly subtle.”

Lochte, in full-on career rehab mode, earned a slightly higher 24 points. But the attention was on an altercation that targeted the athlete. Lochte was reportedly rushed by an unknown pair of men wearing anti-Lochte T-shirts while receiving his scores from judge Carrie Ann Inaba, the Associated Press says.

“Hey, back off,” Inaba said as the altercation was occurring off screen. Host Tom Bergeron cut to a commercial break. Upon return, Bergeron thanked the security team for handling the “little incident.”