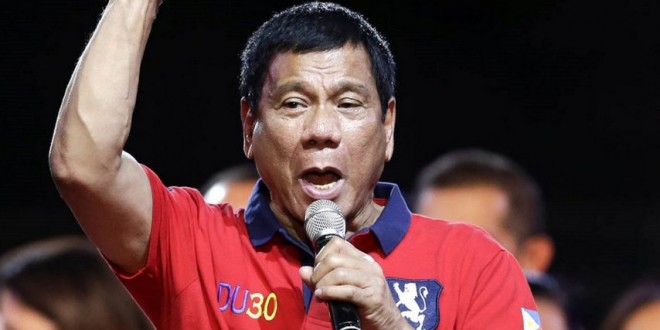 PHILIPPINES: President Compares Himself To Hitler, Says He’d Be Happy To Slaughter Millions Of Drug Users

Philippines President Rodrigo Duterte appeared to liken himself to Nazi leader Adolf Hitler on Friday and said he would “be happy” to exterminate three million drug users and peddlers in the country.

His comments triggered shock and anger among Jewish groups in the United States, which could add to pressure on the U.S. government to take a tougher line with the Philippines leader. Duterte recently insulted President Barack Obama and in a number of remarks he has undermined the previously close relationship between Manila and Washington.

In a rambling speech on his arrival in Davao City after a visit to Vietnam, Duterte told reporters that he had been “portrayed to be a cousin of Hitler” by critics. Noting that Hitler had murdered millions of Jews, Duterte said, “There are three million drug addicts (in the Philippines). I’d be happy to slaughter them.”

“If Germany had Hitler, the Philippines would have …,” he said, pausing and pointing to himself. “You know my victims. I would like (them) to be all criminals to finish the problem of my country and save the next generation from perdition.”

Germany’s government slammed Duterte’s comments as unacceptable, and called in the Philippine ambassador to the Foreign Ministry over the matter. “It is impossible to make any comparison to the unique atrocities of the Shoah and Holocaust,” said Foreign Ministry spokesman Martin Schaefer in Berlin.

World Jewish Congress President Ronald Lauder said Duterte’s remarks were “revolting” and demanded that he retract them and apologize. “Drug abuse is a serious issue. But what President Duterte said is not only profoundly inhumane, but it demonstrates an appalling disrespect for human life that is truly heartbreaking for the democratically elected leader of a great country,” Lauder said in a statement issued from Jerusalem, where he was attending the funeral of former Israeli leader Shimon Peres.

Philippine Rep. Teodoro Baguilat wondered if the president was suggesting that “it’s open season now for all addicts, no more rehabilitation, just kill them systematically like what the Nazis did with the Jews.” He expressed fears that Jewish businesspeople might boycott the Philippines.