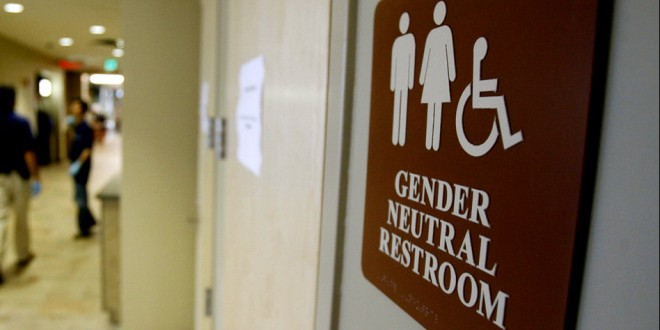 In case you needed a reminder that the Supreme Court’s ruling on same-sex marriage didn’t fix all the problems facing the LGBTQ community, a recent survey by the Pew Research Center has found that just half of Americans support transgender bathroom access according to gender identity, rather than biological sex. The finding comes as part of more general research into public attitudes toward the intersection of religious liberty and nondiscrimination, a topic which, between the rash of so-called “bathroom bills” in the spring and the 2016 presidential election, has been debated frequently this year.

The survey asked more than 4,500 American respondents about their attitudes toward three issues: Transgender bathroom access, the ability for a business to refuse to serve a same-sex wedding, and whether employers should be able to refuse to cover birth control through health insurance. On the bright side, more than two-thirds of Americans (67 percent) support employer coverage of birth control despite religious objections.

However, respondents were evenly split when it came to the other two areas. 48 percent of respondents said that businesses should be able to turn away same-sex couples for religious reasons, while 49 percent said they should be required to provide services anyway. Furthermore, as mentioned above, just over half (51 percent) of respondents agreed that transgender people should be allowed to use a bathroom corresponding to their gender identity, while 46 percent said that transgender people should be required to use the bathroom corresponding to the gender they were assigned at birth. White, churchgoing evangelicals were the most likely to support the latter view.

From the study itself:

When it comes to views about employer-provided birth control, services for same-sex weddings and use of public restrooms by transgender people, there are large differences between some religious groups. White evangelical Protestants tend to say businesses that provide wedding services should be allowed to turn away same-sex couples and that transgender people should be required to use the public restroom of the gender they were born into. And roughly half of white evangelical Protestants say employers should be allowed to refuse to provide birth control in health insurance plans for their employees.

Most religiously unaffiliated Americans (i.e., those who identify as atheists or agnostics or describe their religion as “nothing in particular”) and Jews take the opposite views on these three issues. Black Protestants and Catholics tend to be closely divided on these questions – with the exception of employer-provided contraception coverage. Majorities in each group believe employers should be required to provide contraception in health care plans for their employees.