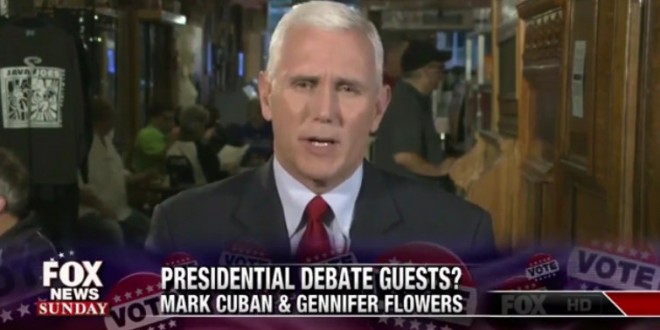 Mike Pence insisted today that Donald Trump won’t be bringing Gennifer Flowers to the debate tomorrow and said he was just trying to make a point.

He told Chris Wallace, “Gennifer Flowers will not be attending the debate tomorrow night. Donald Trump was using the tweet yesterday really to mock an effort by Hillary Clinton and her campaign to really distract attention.”

Wallace asked why Trump would even go down that road, given how bad it looks to be attacking Clinton over her husband’s affair. Pence brought up how Mark Cuban, who Clinton’s inviting, has “mocked and ridiculed my running mate.”

Previous Conway: Trump Is the Babe Ruth Of Debating
Next PENNSYLVANIA: Hillary’s Lead Narrows To +3