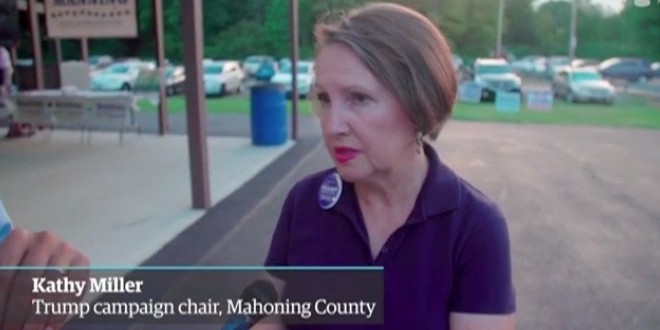 OHIO: Trump Campaign Chair Resigns After Saying There Was No Racism In America Before Obama

Donald Trump’s campaign chair in a prominent Ohio county has claimed there was “no racism” during the 1960s and said black people who have not succeeded over the past half-century only have themselves to blame.

Kathy Miller, who is white and chair of the Republican nominee’s campaign in Mahoning County, made the remarks during a taped interview with the Guardian’s Anywhere but Washington series of election videos.

“If you’re black and you haven’t been successful in the last 50 years, it’s your own fault. You’ve had every opportunity, it was given to you,” she said.

“You’ve had the same schools everybody else went to. You had benefits to go to college that white kids didn’t have. You had all the advantages and didn’t take advantage of it. It’s not our fault, certainly.”

Miller also called the Black Lives Matter movement “a stupid waste of time” and said lower voter turnout among African Americans could be related to “the way they’re raised”.

That @realDonaldTrump Mahoning County, OH Volunteer Chair has resigned. “My personal comments were inappropriate, and I apologize.” pic.twitter.com/T4xX8Bd3IW