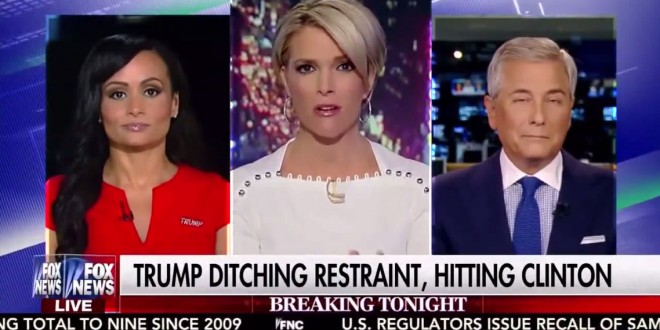 A segment on The Kelly File went a little off the rails tonight when Megyn Kelly confronted Donald Trump spokeswoman Katrina Pierson over whether he’s still a birther. In a new interview tonight, Trump refused to say whether he still holds that insane view about President Obama‘s birth, hinting he would do so “at the right time.”

Kelly asked Pierson, “Why for the love of God won’t he just say President Obama was born in the United States?”

Pierson threw out the standard spiel about how Trump isn’t a typical politician and how this is a distraction by the media, but Kelly called her out a bunch of times, saying, “That’s not gonna fly.” She repeatedly asked Pierson whether he still believes it. Pierson avoided the issue as Kelly kept saying, “That’s a dodge.”