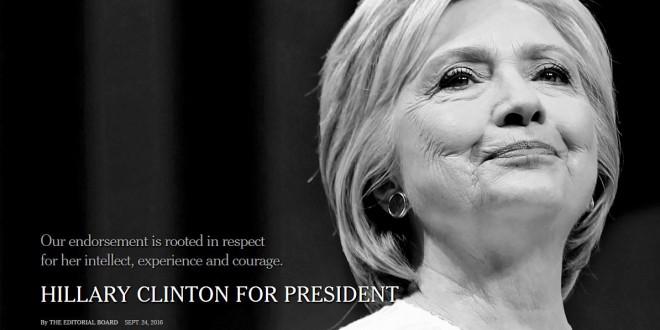 In any normal election year, we’d compare the two presidential candidates side by side on the issues. But this is not a normal election year. A comparison like that would be an empty exercise in a race where one candidate — our choice, Hillary Clinton — has a record of service and a raft of pragmatic ideas, and the other, Donald Trump, discloses nothing concrete about himself or his plans while promising the moon and offering the stars on layaway. (We will explain in a subsequent editorial why we believe Mr. Trump to be the worst nominee put forward by a major party in modern American history.)

But this endorsement would also be an empty exercise if it merely affirmed the choice of Clinton supporters. We’re aiming instead to persuade those of you who are hesitating to vote for Mrs. Clinton — because you are reluctant to vote for a Democrat, or for another Clinton, or for a candidate who might appear, on the surface, not to offer change from an establishment that seems indifferent and a political system that seems broken. Running down the other guy won’t suffice to make that argument. The best case for Hillary Clinton cannot be, and is not, that she isn’t Donald Trump. The best case is, instead, about the challenges this country faces, and Mrs. Clinton’s capacity to rise to them.