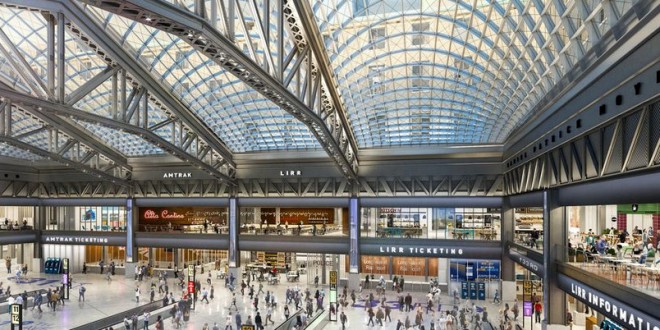 As you can see, the design echoes the original Penn, which was demolished to continuing lament over 50 years ago. Curbed New York reports:

Brace yourselves, New Yorkers: a new Penn Station is officially coming—for real this time. Today, Governor Andrew Cuomo unveiled plans for the forthcoming Pennsylvania Station-Farley Complex, along with announcing the developers and builders who will collaborate on the project. The plans call for a brand new, 255,000-square-foot train hall, which will accommodate both Amtrak and Long Island Rail Road passengers, that’s scheduled to be completed by the end of 2020. (Yes, you read that date right.)

The James A. Farley Post Office building has been “reimagined from the original plan,” which had called for the building to hold only Amtrak. Now, it will measure 250,000 square feet (larger than Grand Central Terminal), and will be known as the Moynihan Train Hall. It will hold Amtrak and the LIRR, along with 700,000 square feet of retail and office space. The design is similar to the renderings, created by SOM, that were revealed in January, with a dramatic glass skylight (meant to reference McKim, Mead & White’s old Penn Station) arching over the concourse.

The LIRR concourses that currently sit within Penn Station will be redeveloped, and headed up by the MTA. This will include “nearly tripling the width of the 33rd Street Corridor, which is among the busiest sections of Penn Station and stretches along the station’s lower level from Seventh to Eighth Avenue.” An RFP will be issued for this work today, and a contractor may be chosen before the end of the year.