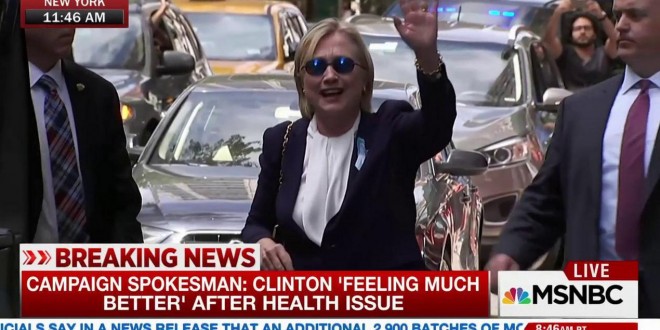 And now we get another week of “sick Hillary” conspiracy claims. CNN reports:

Hillary Clinton left the 9/11 commemoration ceremony Sunday early after she felt overheated and went to her daughter’s apartment, the Clinton campaign said. “Secretary Clinton attended the September 11th Commemoration Ceremony for just one hour and 30 minutes this morning to pay her respects and greet some of the families of the fallen. During the ceremony, she felt overheated so departed to go to her daughter’s apartment, and is feeling much better,” Clinton spokesman Nick Merrill said in a statement. The pool accompanying Clinton says she left the ceremony around 9:30 a.m. While she was making her way into a van in her motorcade, Secret Service agents helped her into the van in the motorcade, a senior law enforcement official said.