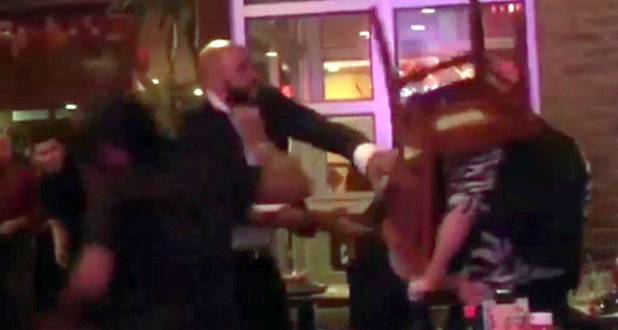 You may recall that the incident, caught on a video that went viral nationwide, was widely characterized as a hate crime until it was learned that all involved parties are gay. Duncan Osbourne reports at Gay City News:

Bayna-Lekheim El-Amin was sentenced to nine years in prison and three years post-release supervision for assaulting two men in the Dallas BBQ in Chelsea in 2015.

“The jury rejected your claim of self-defense,” said Arlene Goldberg, the judge who heard the case in Manhattan Supreme Court, on September 15. “That you did not cause serious physical injury to them was only a matter of luck.”

El-Amin faced five low-level felony assault charges in a May 5, 2015 altercation he had with Jonathan Snipes, 33, and his then-partner, Ethan York-Adams, 26, in the restaurant, which is located at Eighth Avenue and 23rd Street.

The prosecution’s case, which included several videos, was that the fight was divided into three parts and the 42-year-old was not charged with any crime in part one, where he was defending himself from Snipes, who started the fight by attacking El-Amin.

In parts two and three, El-Amin was continuing to fight when Snipes had effectively surrendered, the prosecution said. El-Amin always faced the greatest jeopardy from his actions in part three, where he can be seen hitting the two men on their heads with a heavy wooden chair as they stand with their backs to him.

Videos show that El-Amin did not throw the first punch. Osbourne notes that about 30 people showed up at the sentencing in support of El-Amin, whom some believe was charged because he is black and the victims are white. El-Amin has 29 felony convictions in multiple states. Hit the link for more.