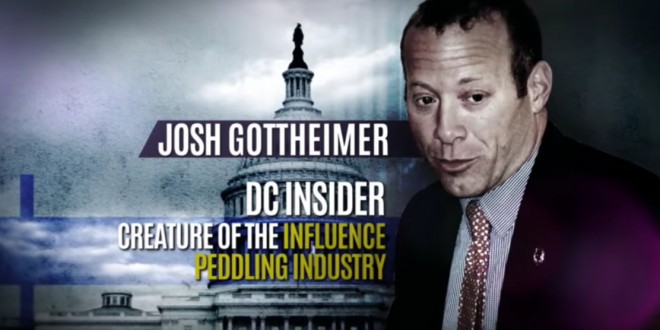 GOP House Rep. Scott Garrett has stopped paying his dues to the RNC because they have supported the candidacy of homocons like Arizona Sheriff Paul Babeu. As his reward, former NOM chairman Robert George has launched attack ads against his opponent, Josh Gottheimer. The Huffington Post reports:

Rep. Scott Garrett (R-N.J.), who is facing the toughest re-election of his career and has been dogged by comments he made about gay rights, is now getting outside help from a super PAC that was founded in part to oppose same-sex marriage.

The Campaign for American Principles has started running ads in support of Garrett, according to NJ.com, and plans to spend $145,000. Last year, the group’s founder, Princeton University professor Robert George, said he hoped the super PAC would pressure candidates to “come down on the side of religious liberty, of the sanctity of human life, of marriage as the conjugal union of husband and wife.”

The group’s Facebook page has also posted about fights around the country to stop the advance of equality for lesbian, gay, bisexual and transgender individuals. The Campaign for American Principles’ ad on behalf of Garrett doesn’t discuss his opposition to LGBT rights, instead touting that he is focusing on the environment, small business and cutting wasteful spending.

Robert George is also the author of the infamous Manhattan Declaration, whose signees vow to disobey any law that grants rights to LGBT Americans. Democrats are running anti-Garrett ads which say his anti-LGBT views “belong in Alabama.” A recent poll shows Garrett leading Gottheimer by a slim margin.

Previous Jan Brewer: Lots Of Democrats Were Birthers Too
Next Wrabel – 11 Blocks [VIDEO]