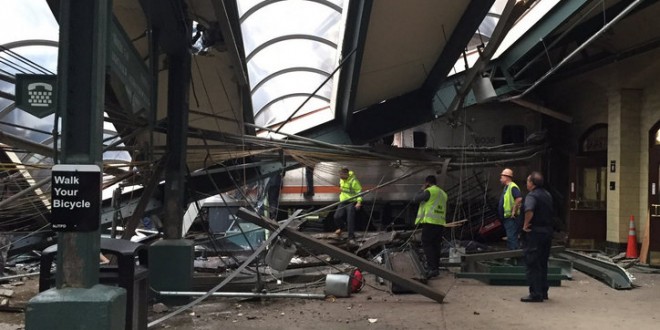 An NJ Transit train crashed into the station in Hoboken at the height of Thursday’s morning rush, leaving twisted piles of metal and bricks as concern grew over the possibility of mass casualties and dozens of injuries.

Pictures on social media showed serious damage to the train station and extensive structural damage to the station. At least one of the NJ Transit cars appeared to be partially inside the building, with some of the supporting beams that hold up the canopy where the trains come in caved in around it.

The cause of the accident was not immediately clear, though the Hoboken police chief told NBC New York there were “mass casualties.” Fire officials said they were investigating the crash as a possible derailment. Several people who were on the train tweeted they felt “lucky to be alive.” All PATH service at the Hoboken station is suspended. NJ Transit said service in and out of the station was also shut down.