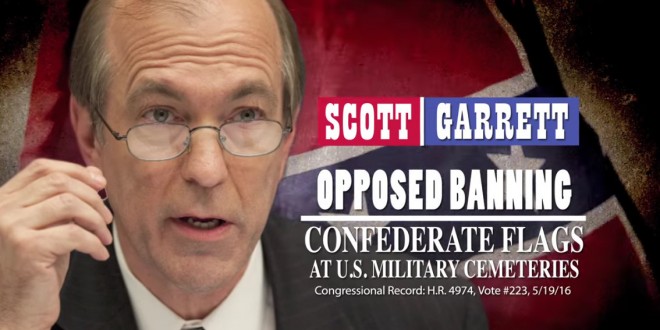 Between his votes supporting the Confederate flag and stand against gay Republican candidates for Congress, Rep. Scott Garrett (R-N.J.) has more in common with rural Alabamans than the people of northern New Jersey. At least, that’s the main message of a new, $162,000 House Majority PAC ad that will air hit TV stations in his district Tuesday.

“His views are perfect for rural Alabama, so why is Scott Garrett representing New Jersey?” the voice-over asks. A fiddle plays a folksy tune in the background. “Scott Garrett’s views might sound fine in the Land of Cotton, but we’re not singing his tune in New Jersey.”

This holiday weekend a banner plane will tow this message over New Jersey beaches: “Scott Garrett: Move To Alabama.”