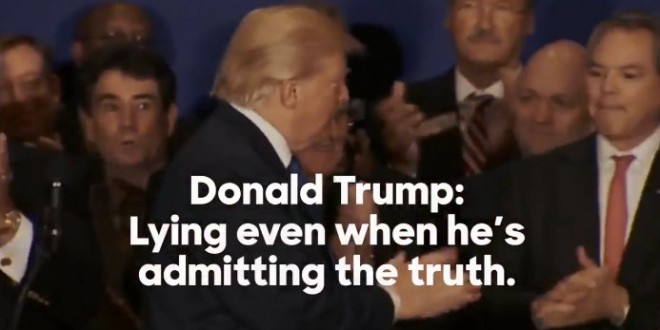 Hillary Ad Slams His “She Started It” Birther Claim: Trump Lies Even When He Admits The Truth [VIDEO]

Hillary Clinton’s media team hits it out of the park for the second time today with a new web ad that documents the many, many lies Donald Trump has told during his years-long birther crusade, including the whopper he told this morning in Washington DC. Watch below. You’ll like this.

And that didn't stop today. pic.twitter.com/KzgPQgPjxK

Previous Reporters Destroy Video Of Trump’s Hotel Tour After He Renegs On Promised Post-Birther Press Conference
Next Trump: Hillary’s Bodyguards Should Be Disarmed And Then “Lets See What Happens To Her” [VIDEO]