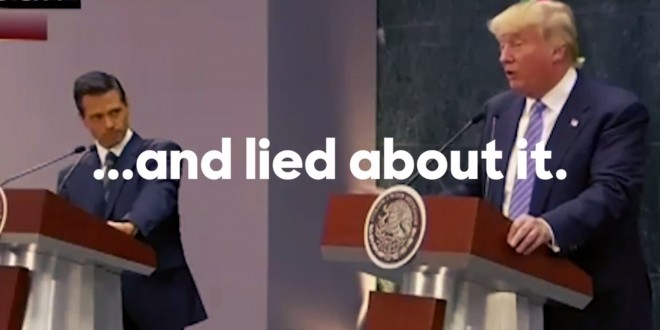 Hillary Clinton’s campaign released a new video mocking Donald Trump for failing to negotiate the terms of his proposed border wall during a meeting with the president of Mexico Wednesday. After a surprise meeting with President Enrique Peña Nieto in Mexico City, Trump told reporters that the two did not discuss who would pay for the wall. Peña later disputed the claim, saying in a tweet that he had made clear during the meeting that Mexico would not pay for a wall, though Trump has routinely promised that they will. The video highlighted these latest developments, claiming that he “choked” during the Mexico trip and then lied about it. “A wall that Mexico will pay for: a bad idea from a worse negotiator,” reads on screen text in the video.

A wall that Mexico will pay for: a bad idea from an even worse negotiator. pic.twitter.com/RZfOKe45RO