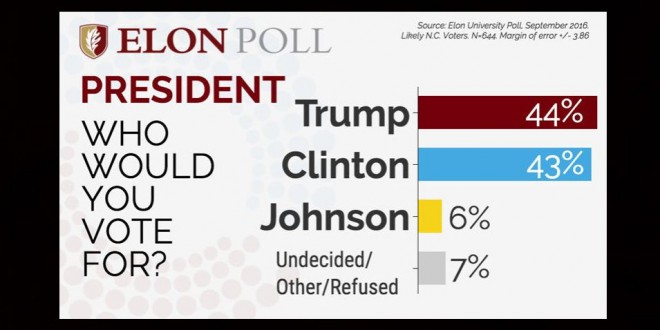 Confirming North Carolina’s status as a battleground state, the latest survey of likely voters in the state by the Elon University Poll found Republican Donald Trump and Democrat Hillary Clinton are virtually tied for the lead with less than two months to go until Election Day. Trump has a 44-43 percent advantage among likely voters in the state, a lead that falls within the poll’s margin of error, with 6 percent of voters backing Libertarian candidate Gary Johnson.

Most voters feel Trump would be better for rich people, white people and men, while most believe Clinton would be better for poor people, women and minorities. Neither candidate fared well when asked how they stacked up against previous presidential candidates from their parties, with a majority saying both are worse than usual.

“Republican strategists have long known that they need to tighten the racial gaps between the parties,” Husser said. “However, we don’t see that happening with African-American voters in North Carolina. Just 2 percent of likely black voters we talked to plan to vote for Donald Trump.” Trump is attracting more male voters, with 55 percent of men picking Trump, and Clinton maintains an edge with women voters, who prefer her to Trump by a 53-47 margin. Previous World Net Daily Has The Phoenix Sadz
Next WASHINGTON: Brian Brown To Hold Anti-Gay Protest At Mexican Embassy In Advance Of Protests In Mexico