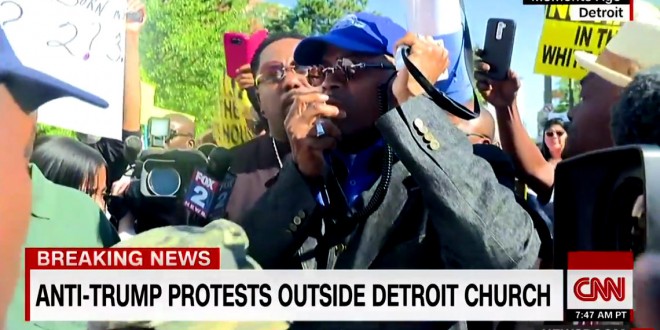 Republican presidential candidate Donald Trump arrived at a black church in Detroit on Saturday greeted by groups of protests from community, religious and labor activists who denounced his visit that is intended to reach out to the African American vote.

The Rev. Lawrence Glass said during a protest outside the church that Trump’s heart is not in helping blacks. Glass said Trump represents “politics of fear and hate” and that “minorities of all kinds have much to lose taking a chance on someone like” Trump. Another group of pastors were to march in protest to the church. Some protesters tried to push through a barrier to the church’s parking lot but were stopped by church security and police.

The Saturday visit, which is open to the public, was scheduled as part of Trump’s continued outreach to African-American voters. Native Detroiter Dr. Ben Carson, who is advising Trump after pushing for an end to welfare dependency during his own failed presidential bid, plans to tour a neighborhood with the New York businessman in the city where he grew up after a church service and interview with the Impact Network.