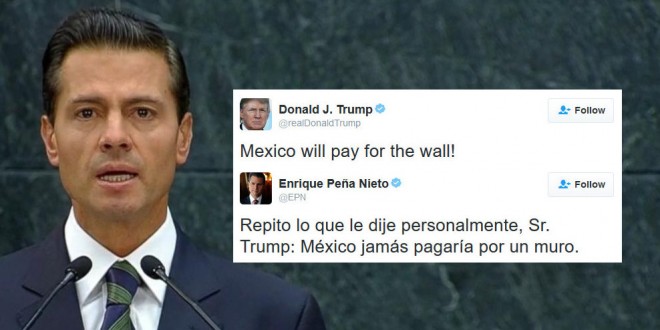 Mexican President: Shut Up, Donald Trump, I Already Told You In Person We’ll Never Pay For Your Wall

Mexican President Enrique Peña Nieto on Thursday called out Donald Trump on Twitter, insisting that his country will “never” pay for the Republican nominee’s proposed massive wall along the US-Mexico border.

Peña Nieto was responding to a tweet from Trump earlier Thursday claiming that “Mexico will pay for the wall!” “I’ll repeat what I told you personally, Mr. Trump: Mexico will never pay for a wall,” Peña Nieto fired back in Spanish.

The two men met Wednesday in Mexico City and delivered a joint statement and press conference afterward. Asked about whether payment of the wall was discussed between the two leaders, Trump answered that it was not.

“We didn’t discuss payment of the wall,” Trump said. “That will be for a later date.” But Peña Nieto tweeted later that he “made it clear” to Trump that Mexico wouldn’t pay for the wall at the onset of their private meeting.