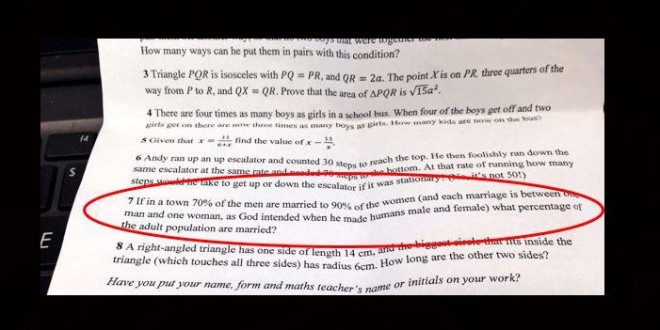 Math Quiz: If 70% Of Men Are Married To A Woman As God Intended, What Are The Odds Teacher’s A Jerk?

A grammar school has been accused of handing out ‘homophobic’ work after a maths question sparked fury amongst parents and students. The shocking question, handed out by a school volunteer to a group of students at the all-boys Royal Grammar School, in High Wycombe, suggests only men and woman should get married “as God intended”.

The optional math test “posers” could have been picked up by all the school’s 1,300 students, including children as young as 11. One parent, who did not want to be named, slammed the homework as being “homophobic” and having an “anti-LGBT bias”.

Speaking to the Bucks Free Press this morning, headmaster Philip Wayne said: “I’m sorry on behalf of the whole school community of governors, staff and boys for any offence this has caused.” LGBT rights charity Stonewall has highlighted the importance of tackling discrimination within school, while praising RGS for dealing with concerns quickly.

What’s the correct answer, anyway? I hated these questions. (Via Christian Nightmares)

Previous TEASER: Tom Of Finland [VIDEO]
Next Dem Sen. Chris Murphy To Donald Trump: If Hillary Is Assassinated, Her Blood Will Be On Your Hands