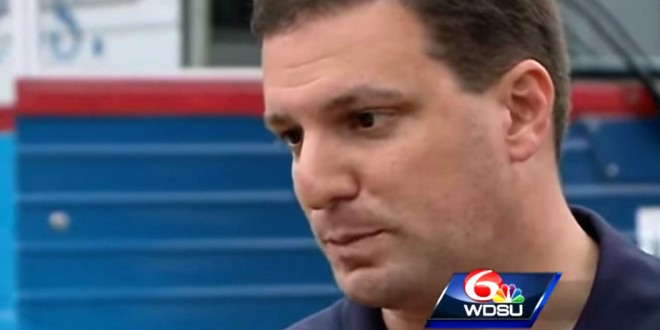 Yenni is married and has a young child. The New Orleans Times-Picayune reports:

Explicit text messages from Jefferson Parish President Mike Yenni to a 17-year-old male have been subject of an FBI inquiry, a spokesman for the bureau confirmed Friday (Sept. 30). Yenni did not immediately respond to a request for comment. “We will have no further comment about this matter going forward,” said Kyle Hanrahan, the FBI’s Louisiana division chief.

WWL television reported that Yenni, now 40, exchanged sexually suggestive messages with the gay youth, now 19, in 2015 when Yenni was Kenner’s mayor and campaigning for parish president. As part of its review, the FBI took the youth’s mobile phone, the station said.

The youth and Yenni were introduced to each other during a function at the teen’s high school, began texting and once met at a mall food court where Yenni gave him some designer underwear, the station said. The texting continued and grew more explicit, including one message proposing group sex with the youth, a friend and the parish president, the station said.

As a political issue, the texting could damage Yenni. As a legal issue, the age of consent in Louisiana is 17, so it would not have been a crime for Yenni and the youth to have sex. Another federal law, rarely used, forbids using telecommunications devices to transmit “obscene” content to a person younger than 18, the TV station said.

Previous LOUISIANA: Dem Governor Sues Attorney General For Blocking Contracts Over Their LGBT Protections
Next Russians Suspected In DDoS Attack On Newsweek Following Their Exposure Of Trump’s Dealings In Cuba