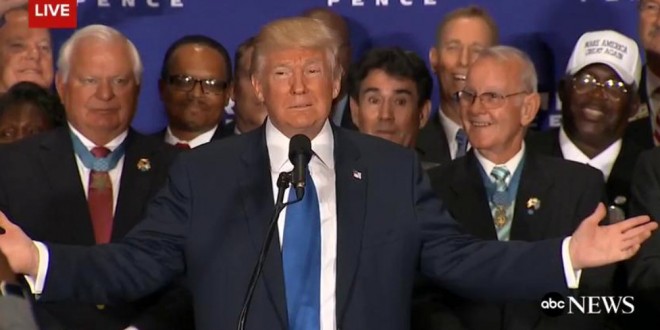 Donald Trump is due to take the podium shortly at his garish Trump International Hotel in Washington DC, where the presidential suite will go for $100,000 per night (five night minimum stay) during the January inauguration celebrations for Hillary Clinton. Heh. Watch below. Trump is expected to finally address his racist birther claims, which his campaign last night said he no longer supports. Expect many, many, many lies.

Previous Fox Pundit: Birtherism Won Trump The Nomination
Next Trump Junior: That Wasn’t A Holocaust Joke And I Never Heard Of The Nazi Mascot I Tweeted Out [VIDEO]