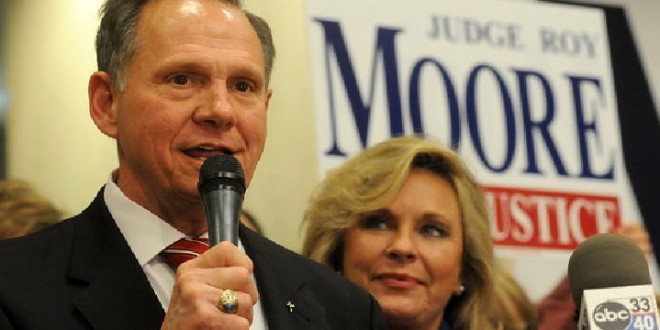 Kayla Moore Has The Shitcanned Husband Sadz: Evil Dems Brought Him Down With A Prancing Drag Queen!

The Foundation for Moral Law, a Montgomery-based legal foundation dedicated to strict construction of the Constitution according to its Framers, denounced the Court of the Judiciary’s Friday ruling suspending Chief Justice Roy Moore for the rest of his term.

President Kayla Moore declared, “The ruling today regarding our founder Chief Justice Roy Moore is nothing more than persecution of a Christian official. It is an effort to silence by threat of removal a liberal agenda. There were professionals in that courtroom–doctors, lawyers, judges, and more who all agreed that Chief Justice Moore was completely correct. Yet, the Court of the Judiciary suspended Chief Justice Moore without pay for the remainder of his term and is making him pay all expenses of trial! This has never happened before.”

President Moore further noted, “This small unelected group of people, mostly Democrats, have overturned an election of the people of Alabama. All these efforts are being led by a guy who dresses up like a woman and prances around on the stage. The good people of Alabama have had their votes taken away from them once again.”

The Foundation For Moral Law literally advocates for replacing the government at all levels with a “bible-believing” Christian theocracy. Roy Moore is its founder and was its president until winning reelection to the Alabama Supreme Court.