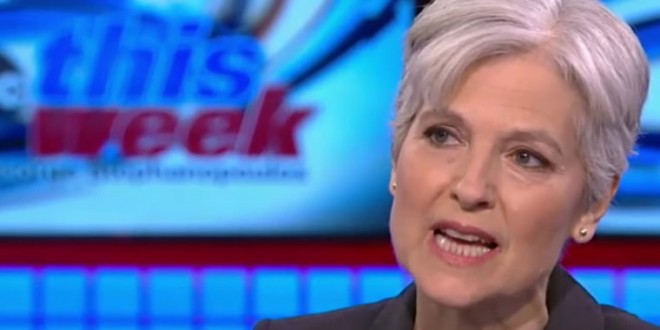 As much as Stein despises Trump – and she really, really does – she describes the choice between him and Hillary Clinton as an abominable binary offering “death by gunshot or death by strangulation.”

But her contempt has a more cutting quality when she talks about Clinton. She mocks Trump as braying menace; Stein thinks he’s, at heart, a bumbler who will be neutered by his own party after being elected. But it’s Clinton who poses the greater threat, in Stein’s estimation, because she knows how to move the levers of Washington.

“Donald Trump, I think, will have a lot of trouble moving things through Congress,” Stein explains. “Hillary Clinton, on the other hand, won’t… Hillary has the potential to do a whole lot more damage, get us into more wars, faster to pass her fracking disastrous climate program, much more easily than Donald Trump could do his.”

The interview closes with Stein challenging Hillary to a foot race. For real.