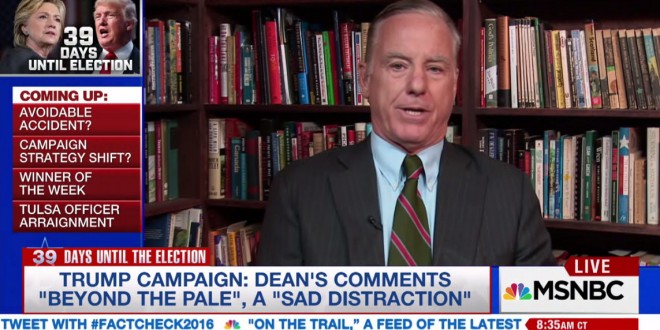 Howard Dean was largely unapologetic Friday morning when he returned to MSNBC, where he is a paid contributor, to defend his allegations that Donald Trump may have been high on cocaine during the first presidential debate.

“People who stay up at 3:00 and 4:00 and 5:00 in the morning tweeting about sex tapes, these are not normal people,” Dean said, referring to Trump’s tweets early Friday targeting former Miss Universe Alicia Machado.

“There is something the matter with him, and I don’t know what it is,” Dean continued. “Let me say this: I would be very willing to apologize. Not to Donald Trump, but I don’t think using innuendo is a good thing. But the problem is much greater than that.”

Dean said he would rather “the media of this country” apologize for giving Trump “$2 billion worth of free time.” He wondered why he didn’t hear “the pompous hand-wringing editorials on Bloomberg News” when Trump surrogates spread bogus rumors about Hillary Clinton having Parkinson’s Disease.

Previous Trump In 1999: Ivanka Made Me Promise Not To Date Girls Younger Than Her And The Field Is Very Limited
Next Liberty Counsel Has The Roy Moore Sadz