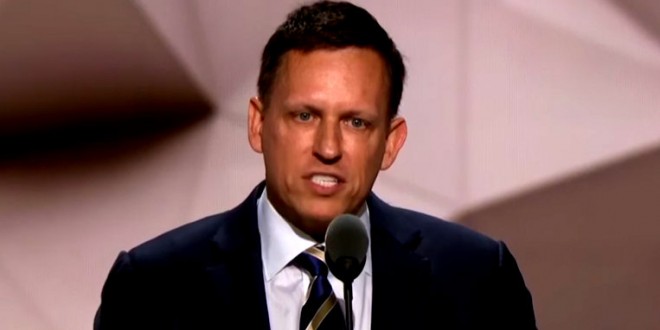 Cartoon villain Peter Thiel descended upon Chicago earlier this week to test out how it feels to be reviled next to a freshwater lake instead of his usual ocean. Seems like it went swimmingly.

He got the chance to unleash some of his signature awful during a talk at Roosevelt University, when he implied that no person of worth could ever possibly live in Chicago, the third-most populous city in the country. What a charmer.

“If you are a very talented person, you have a choice: You either go to New York or you go to Silicon Valley,” the 48-year-old Paypal founder told the crowd, which consisted primarily of hacks foolish enough to live in this destitute, Midwestern shantytown. He apparently was there to discuss the “state of the American Dream.” Seriously.

The Chicago Tribune is similarly pissed off:

Chicagoans can offer a profound thank you to billionaire Peter Thiel, who deigned to make a flying visit to our cow town to share a few pearls of wisdom Tuesday.

“If you are a very talented person, you have a choice: You either go to New York or you go to Silicon Valley,” the 48-year-old PayPal founder tactlessly informed a presumably slightly less talented crowd at Roosevelt University during a lunchtime talk.

Neither his support for Trump nor the First Amendment implications of his campaign to destroy Gawker nor his slight to Chicago came up during the wide-ranging discussion of the state of the American Dream.

After his speech, Thiel went home to drink the blood of young people on his floating city-state where he can legally pay employees with sawdust and insults. (Tipped by JMG reader Todd)

Previous CLEVELAND: Street Where Trump Supporter Don King Murdered A Man To Be Named For Don King [VIDEO]
Next FRC’s Prayer Of The Day: Ask God To Wake Up And Save Christians From The Terror Of Losing This Election