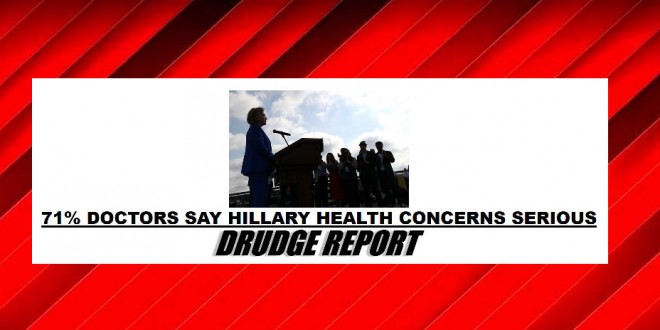 In his latest attack on Hillary Clinton’s health, homocon blogger Matt Drudge’s headline screams that 71% of doctors say that her medical condition is serious. Here’s the press release he links:

Concerns about Hillary Clinton’s health are “serious—could be disqualifying for the position of President of the U.S.,” say nearly 71% of 250 physicians responding to an informal internet survey by the Association of American Physicians and Surgeons (AAPS).

About 20% said concerns were “likely overblown, but should be addressed as by full release of medical records.” Only 2.7% responded that they were “just a political attack; I have confidence in the letter from her physician and see no cause for concern.”

While more than 81% were aware of her history of a concussion, only 59% were aware of the cerebral sinus thrombosis, and 52% of the history of deep venous thrombosis. More than 78% said the health concerns had received “not enough emphasis” in the media, and only 2.7% that there had been “too much emphasis.”

Nearly two-thirds said that a physician who had a concern about a candidate’s fitness to serve for health reasons should “make the concerns known to the public.” Only 11% said a physician should “keep silent unless he had personally examined the patient,” and 10% that the candidate’s health was “off limits for public discussion.”

The association is generally recognized as politically conservative or ultra-conservative, and its publication advocates a range of scientifically discredited theories, including the belief that HIV does not cause AIDS, that being gay reduces life expectancy, that there is a link between abortion and breast cancer, and that there are links between autism and vaccinations.