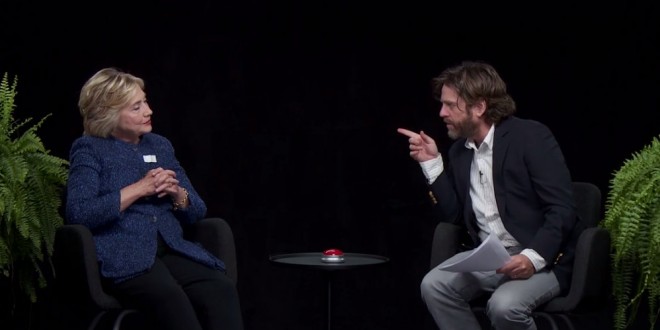 In yet another play for the hearts of the nation’s youth, Hillary Clinton has appeared on Zach Galifianakis’ web talk show Between Two Ferns. This time however, it stands to pay off for Clinton — she gets to sit mostly in silence and offer deadpan responses to Galifianakis’ deadpan jokes. Even her slow blink works well with the Between Two Ferns Charlie Rose aesthetic.

At the start of the interview, Galifianakis asks her if she’s excited to be the first “girl president,” then follows up by reminding her that “for a younger, younger generation you will also become their first white president, so that’s pretty cool, too.” Later he asks, “When you see how well it works for Donald Trump, do you ever think ‘Oh, I should be more racist?'” Clinton delivers a solid performance as “person who is annoyed with Zach Galifianakis.”