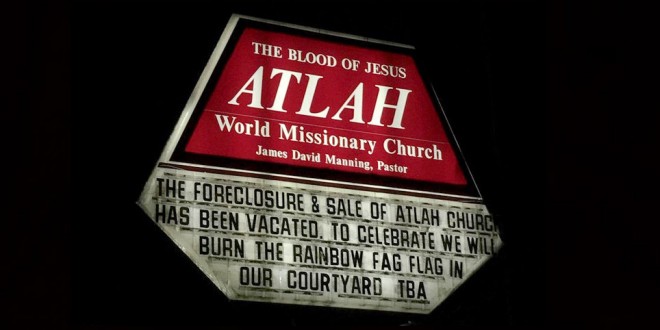 Via press release from the Ali Forney Center:

The Ali Forney Center (AFC), the nation’s largest and most comprehensive organization dedicated to homeless LGBT youth, announces that it is organizing a demonstration to protest ATLAH Church’s plan to burn the rainbow flag. Yesterday, Rev. James Manning posted a sign indicating his intent to burn the rainbow flag as a “victory celebration” in response to a recent court order relating to his ongoing foreclosure case by the City of New York for lack of payment of city utility bills.

“Reverend Manning’s threat to burn the rainbow flag in the courtyard of his church is reprehensible, especially in the aftermath of the Orlando Massacre,” said Carl Siciliano, founder and executive director of AFC. “We plan to surround his church with rainbow flags, the symbol of our pride as a community, to show that our pride cannot be destroyed, symbolically or otherwise. The best response to his hate is a display of community love and pride by the LGBT community and our allies,” said Siciliano.

This week a court order was released in the ATLAH foreclosure case, restoring the case to the calendar. This vacates the foreclosure while ATLAH is able to make its argument to the court that the foreclosure should not proceed because the church is tax exempt. The NYC Dept. of Environmental protection has previously determined that ATLAH does not qualify for an exemption from paying their water bills because the church facility includes six residential apartments. It is anticipated that these legal proceedings will drag on for many months before a final determination is made. A link to the court order can be found here.

“Rev. Manning’s declaration of victory is premature,” adds Siciliano. “All he has won for now is the opportunity to incur many further legal costs as he tries to escape the consequences of decades of failure to pay ATLAH’s water bills.”

“Furthermore, I strongly suspect that the ATLAH facility would not qualify for an exemption, not only because of the residential apartments, but also because of the film studio Manning has had constructed in the space, where he regularly films videos promoting politicians he endorses, and attacking their opponents. It is my understanding that such use of the ATLAH facility very likely violates the requirements for tax exempt organizations,” says Siciliano.