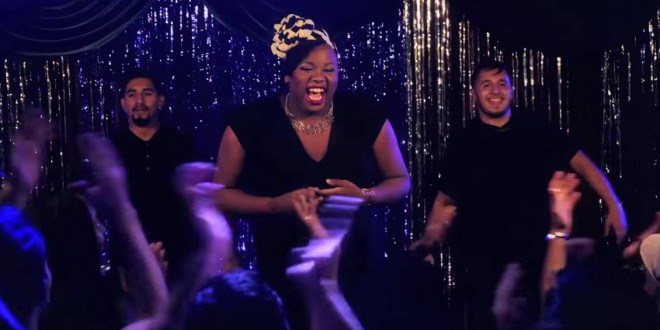 An innovative campaign and the song really IS fantastic. Mark King breaks it down at My Fabulous Disease:

The Centers for Disease Control and Prevention (CDC) has produced a music video that joyfully educates gay men about HIV prevention options. And it is foot-stomping fabulous.

The song, “Collect My Love,” was released by The Knocks and it features vocals by Alex Newell, the young gender-bending singer who rose to fame by stealing season three of the television series, Glee (his rendition of “Boogie Shoes” on that show is a one-way ticket to my happy place).

In the CDC music video released today, Newell performs the song in a crowded, gay-friendly dance club. The atmosphere is ebullient and cruisy, with gay men making connections left and right. That’s where HIV prevention comes in.

As the song progresses, vignettes play out in which couple takes a home HIV test, one man takes his PrEP med, and another discloses his undetectable status to a suitor. Kudos to the CDC for such an inventive campaign. The second “making of” clip below features Newell discussing various HIV prevention options.