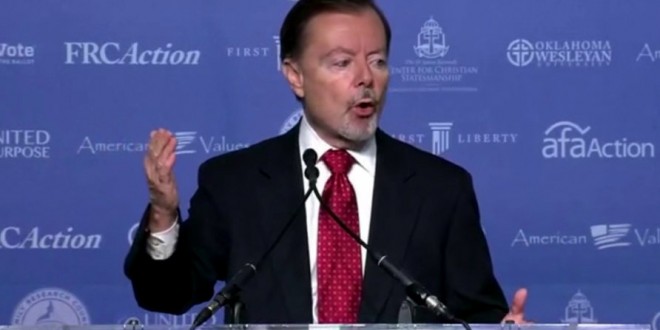 Gary Bauer At Hate Summit: Christians Are Like The Flight 93 Passengers Trying To Stop A Hijacking [VIDEO]

Gary Bauer of American Values, which is one of the co-sponsors of the 2016 Values Voter Summit, closed out his speech at the event today by literally comparing the upcoming presidential election to Flight 93, the plane that crashed in Pennsylvania on 9/11 after passengers fought back against the terrorists who had hijacked it.

“This country is the equivalent of that plane right now,” Bauer said, citing a recent column posted on the Claremont Institute website. “We’re heading for a disaster unless we can get control of the cockpit again and then maybe, just maybe, we’ll have a chance.”

The passengers on that plane “took the only shot they had,” Bauer stated. “Ladies and gentlemen, this is a Flight 93 election. This may be out last shot. It’s time to roll. It’s time to run down the aisle and save Western civilization.”

Previous Instead Of Releasing His Medical Records Trump Will Reveal His “Health Regimen” On Quack Dr. Oz Show
Next BREAKING: US & Russia Announce Syria Peace Plan